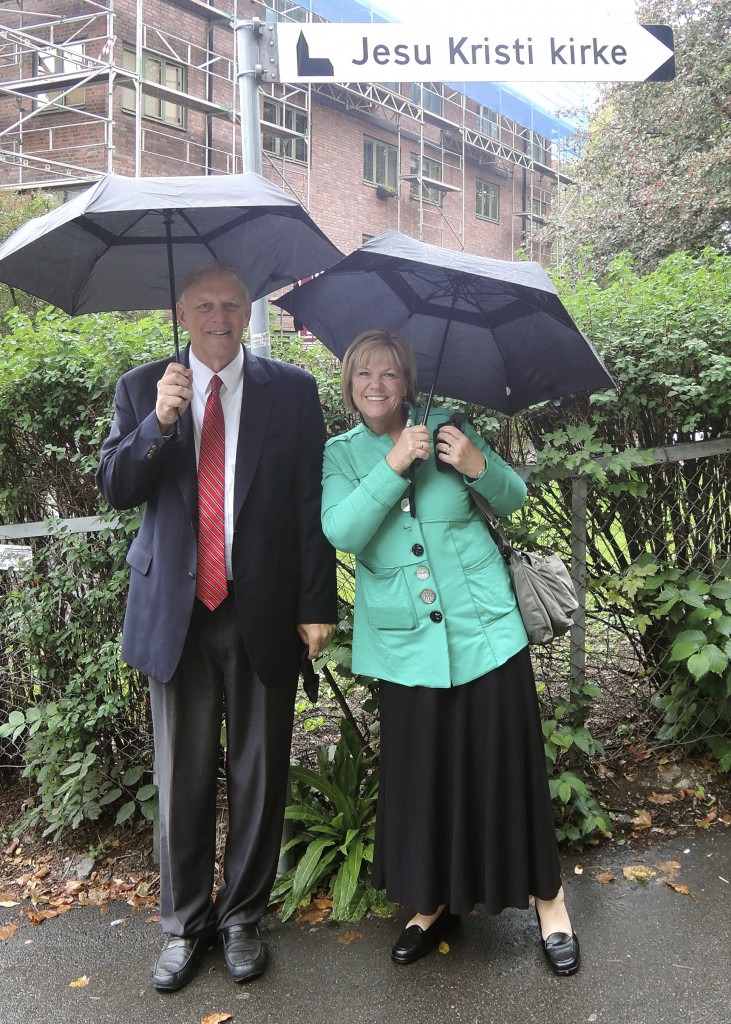 The last 10 months in a nutshell!

President Hill was called by President Uchtdorf on September 18, 2014 to serve as President of the Norway Oslo Mission.
I was asked to accompany him as his companion and missionary. A mission was not in our plans at his time but we soon learned that the Lord’s time is sometimes different than our time.
We had planned a trip several months in advance of this call to Norway not knowing that in June we would be moving to Norway for 3 years! We were asked not to tell anyone of our call until notified…
24 hours after our meeting with President Uchtdorf we were on a plane headed for Norway.
It was such a blessing to be able to see Norway through different eyes.
We saw happy missionaries, members and a beautiful country.
After returning from our trip,
we busied ourselves with planning the next 10 months.
In October, we told our children of our call but not the location.
In December we were able to share the joy of receiving a mission call with family and friends.
We were to arrive at the MTC June 24, 2015. At the time it seemed so far away but we learned that sometimes time passes in the blink of an eye.
We were blessed many times over as we decided to sell our home and Tracy prepared for retirement from IHC.
We bought a twin home in Highland and decided to store our belongings (junk) in the basement while we were gone. We decided to rent the main floor. Before it was even completed we were approached by a couple that wanted to rent it for 3 years! How perfect!
We set about the task of cleaning, organizing and dejunking our home of 28 years. We began in January and our children took the last load out while we in the MTC. It was a long and sometimes painful process as the memories of our wonderful home were stored away in boxes.
We were able to sell our home the first weekend it was listed. We may have boxed up the junk but thankfully all the precious memories are ours forever!
Our children arrived the first week in June to spend our last family time together in our home.
What began on a rainy day in October 1976 with just the two of us…now included 34!
Tracy and I were set apart by Dallin H. Oaks and Elder Hallstrom on June 11, 2015 with our children and their spouses and Tracy’s parents with us.

So….we are off a new adventure called by a Prophet of God.
We are so excited to be a part of “hastening His work” and feel blessed to call Norway home for this season our life!

Thanks for sharing this remarkable experience. It strengthened my testimony of the Lord directing His work here on the earth and the importance of listening for the promptings of the Spirit. I feel blessed to have our son called to serve there with you.